I was sitting in the backyard yesterday watching the kids run around and be silly. They just finished popsicles, and the cicadas were buzzing. They both were laughing, especially Christian. I had this wave of emotion come over me,  and as the tears rolled down my face it hit me: It's not always going to be like this.

A day will come when video games will replace sidewalk chalk. They won't beg me to play with them, rather they'll be begging me to leave them alone. Lily probably won't always want to wear her dresses, and Christian will put away Buzz LightYear and Woody. Sticky hands won't paw at me for hugs and kisses, and bedtime routines won't include stories. Our playroom won't be covered with Little People and MatchBox Cars. 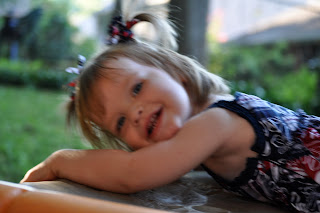 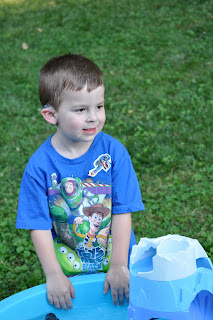 My babies are growing up, especially Christian. I've noticed a change in him this past summer. He's taller, stronger, yet leaner. He's even more goofy than what he was before, making up jokes, and telling me about "Star Wars Guys", and creating elaborate long stories about his little fantasy play world in the playroom. It has been such a gift being able to stay at home with them, always being there for the little moments during the day. Patting Lily's back during a restless nap, having the two of them with me for lunch everyday, making snacks together, going on so many fun field trips, and even the car rides to and from school are moments I know I will cherish forever.  I realized that instead of complaining about all these little things that come with having 2 kids exactly 2 years apart under the age of 4, I really need to try to embrace this beautiful, crazy, sleepless years before they disappear.
at 7/23/2010

You're amazing Tina and you're kids are so lucky to have you! Even still, I need to remind myself how fast it does go by and to slow down to enjoy the moments ... the small things, because before you know it, they're entering HIGH SCHOOL!

Christian and Lily's Mommy
I'm a 30something Mom to my two beautiful children, Christian (6), and Liliana Grace (4) Christian was born Deaf, and was implanted with his Cochlear Implant at 14 months of age and his second at 5 years old. Lily is hearing, and is a handful but a joy in everyway! When I'm not shuttling my kids back and forth from playdates, therapy appointments, school, and Target (we're ALWAYS THERE!), I'm advocating for my son, and all children with hearing loss.