Just after Christian's first Cochlear Implant activation (almost 5 years ago...wow....) my life was consumed by teaching him to "LEARN TO LISTEN". I lived my life as his Mother creating language opportunities knowing that Christian's deafness had NOTHING to do with the softness or loudness of a sound but rather to give him the tools to apply MEANING to what he was hearing.

Do you hear that?

I heard that sound!

Swoosh, goes the basketball in the net.

Then, almost magically....sounds had meaning. I mean, I know it wasn't magic. Christian's brain learned to take the SWOOSH of a basketball through the net and interpret that as a meaningful sound. He figured out that the squeaks in his ear were shoes on a hardwood floor in his school. The rumble he heard faintly through the windows were OBVIOUSLY airplanes flying in the distance. He stopped asking me "WHAT'S THAT?". As he grew, it just clicked. Honestly, at almost 5 years post his first activation and one year after his second implant the days of me teaching him a sound and what the meaning was are almost gone. And then we took him to the Verizon Center to see his beloved Capitals practice during Fan Appreciation Night.

My little sports nut, who watches SportsCenter with the fervor and appreciation of a college kid, was thrilled to see his heroes shoot the puck around.  I took him down to the very front, and watched my sweet boy who is growing so fast, bang on the glass and chant "LET'S GO CAPS". With my hands on his shoulders, I followed the puck with him. Even with thousands of people, the rink did eventually have a calm quiet about it. With the sounds of pucks hitting the boards echoing throughout the building, my almost 6 year old turned to me and said

"Oh sweetie, that's just the sound of the pucks hitting the---"

With tears in my ice I told him that was the sound of the blades cutting through the ice. And that if he listens, he can even hear when the players use their edges to stop.

Yes, my amazing little boy...it is SO VERY COOL.

And just like that, I realized that my job isn't quite done. My little boy, who can tell the difference between a french horn and a trumpet by sound, is STILL learning to interpret the meaning of sounds. 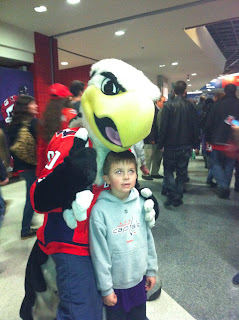 Christian and Lily's Mommy
I'm a 30something Mom to my two beautiful children, Christian (6), and Liliana Grace (4) Christian was born Deaf, and was implanted with his Cochlear Implant at 14 months of age and his second at 5 years old. Lily is hearing, and is a handful but a joy in everyway! When I'm not shuttling my kids back and forth from playdates, therapy appointments, school, and Target (we're ALWAYS THERE!), I'm advocating for my son, and all children with hearing loss.